Aerospace Grommets Perform without Glue – So Why Is Glue Still Applied?

DTi created a grommet edge solution -Spring-Fast- that performs without glue.  However, some clients still add some glue to the product.  Why? Surely that’s like licking an envelope to seal it and then adding sealing tape? 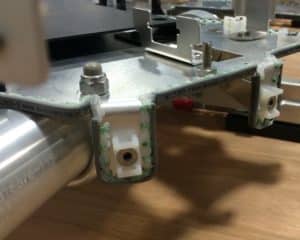 The explanation has some complexity despite the seeming simplicity of the component.

The EWIS requires grommet edge abrasion protection to prevent system issues/ data loss caused by arcing, sparking, and shorts.  For decades the SOP for grommet application has been to attach a nylon grommet e.g. MS21266 to lightening holes, straight and non-straight edge runs.

Nylon MS21266 grommets require glue because they grip poorly and tend to pull away from edges due to their natural stiffness and coil set.  In most cases this glue is applied liberally- colloquially known as “Elephant Snot”…and its appropriate if you have seen what it looks like.  The image above shows what some techs are doing.

The gluing process includes many steps:  cleaning, gluing, fixturing, inspection, and clean up.  It is a long slow messy procedure that is a time, cost, and efficiency sinkhole.  It generally also leads to a high level of rework and raises the cost of poor quality.

We all know the dangers of even simple items being un-tethered in a complex system like an aircraft.  A dis-bonded nylon grommet is FOD and creates an additional damage risk over and above any compromised wiring.  It’s even worse if the nylon and adhesive disintegrate due to repeated flight stress as it then essentially releases fragments of adhesive and nylon grommet into aircraft compartments. The kind of FOD that is difficult to find and clear up.  We think the reason it is applied so liberally is an effort to ensure this doesn’t happen.

Spring-Fast Grommets were engineered to do this job better – without glue – in effect, it’s a better grommet “mousetrap”.  Companies are switching to it because they recognize that it provides best-in-class performance, greater manufacturing process efficiency, a reduction in workplace hazmat issues – and the icing on the cake – it reduces overall install cost by at least 49%.  The very process of installation significantly lessens the likelihood of FOD as far less material is carried into the aircraft to install it.

It can do all this because it is so simple to install.  It snaps on with simple finger pressure and holds fast. The grommet is steel encapsulated with fusion bonded nylon and its castles (teeth) angle inward to exert a gripping force on the edge.  This grip has been tested to a 3 axis static load of 20/20/20G -so it laughs in the face of high levels of vibration and shock. That means it thrives in highly challenging environments – including military combat applications.  There have been no known Spring-Fast failures over its 35-year life.

Given this outstanding performance – why is glue sometimes added to Spring-Fast Grommets?

At first, we thought this was just habit as nylon has been the SOP for 50+ years but it turns out it's much more about an abundance of caution.

Aerospace is well known for risk avoidance and layers of redundancy -and understandably so as the consequences can be dramatically bad if a system fails in flight.

Driven by this concern some engineers and techs go to the extremes as seen above, while others tend to add a small quantity of glue to the terminating ends. Either way, it's seen as an insurance policy to ensure that the grommet stays in place under catastrophic conditions.

We aren’t knocking it- it’s like adding suspenders to your already belted pants- you just want to be certain your pants stay up.  Over time we know you'll realize that your pants will stay up without the suspenders.

For now, to borrow an old ad slogan: A little dab’ll do ya!

Find out more about Spring-Fast grommet edging here   Free samples can be requested on any page.